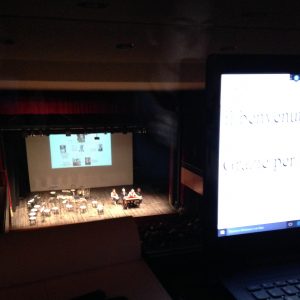 On Monday 9 May 2016, one of our final-year students and a newly-graduated one tested a speech-based real-time subtitling tool at “Diego Fabbri” theatre in Forlì during a speech by Mario Capecchi, the Italian-born American molecular geneticist and Nobel Laureate (2007).

Under the supervision of Claudia Lecci, our re-speakers operated directly from the theatre control room to test the full potential of a speech recognition system for live subtitling (Dragon Naturally Speaking), which had been previously optimised for their voices. Subtitles were not screened publicly – an excellent interpreting service was provided by two other students of ours -, but this first trial run was such a success, that we will certainly try again, this time for a real audience.

Joseph Stiglitz, recipient of the Nobel Prize in Economics (2001), is coming to Forlì on Oct. 10th 2016: what better chance?