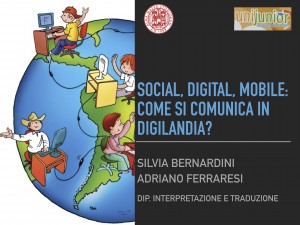 On Saturday 19 December 2015, Silvia Bernardini and Adriano Ferraresi delivered a most unusual lecture to a very special audience. Thanks to Unijunior – the Italian version of European Children’s Universities – children aged 8 to 14 could attend a university lecture, and learn complex subjects in an engaging and entertaining way.

During their presentation, titled “Social, Digital, Mobile: Come si comunica in Digilandia?” (“Social, Digital, Mobile: How do we communicate in Digiland?”), Silvia and Adriano introduced their audience to the world of video game, app and website localisation. With their help, and the support of the amazing Unijunior staff, more than 100 children explored an HTML page, translated a short heading taken from Disneyland’s website, learnt the meaning of the word crowdsourcing, and were introduced to the Facebook translation app. Finally, they contributed to the subtitling of a short video on… videogame localisation, discovering that translating, both in Digiland and outside, is much more than just replacing words in different languages.

Children were the real key players of the scene: they were extremely curious, involved, and interested in learning new concepts. At the end of their Unijunior class, they had their transcript of records signed and stamped: one step closer to their well-deserved degree certificate!