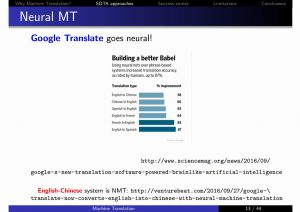 Lucia Specia, Professor of Language Engineering and Deputy Head of Research at the Department of Computer Science,  Sheffield University, gave a speech titled “Machine Translation: Modern Approaches and their Use in Real World Scenarios”.

In the first part of her talk, we were shown glimpses of future developments, especially with Neural Machine Translation as is being tested by Google. Just then were we brought back to earth, with a survey of MT solutions for real world scenarios. Lucia presented a series of success stories in the use of MT by companies and institutions (Autodesk, the European Commission, Intel and Skype Translator).
Although translators are known to hate MT rather than love it, it is generally acknowledged to be a typing aid and a source of inspiration – or even a means to move away from our own idiolect, as Michael Farrell suggested during the questions/comments session at the end of Lucia’s talk!